Udder Problems in the Lactating Mare

Mammary gland problems in the mare are thankfully not common, occasionally however, some issues can arise including; mastitis, abnormal milk production, discharge, swellings, lumps and ulceration.

The horse has two mammary glands and two teats, which are quite small, unlike the cow (which has four large teats). The technique for milking a horse is also quite different to a cow and there are two holes in the tip of each teat that don’t always point in the same direction. Collecting milk into a jug to feed a foal can be a challenge and a bit messy! Contact your vet or produce store for tips and perhaps a ‘milking apparatus’ should you ever find yourself in a position where you need to milk your broodmare. 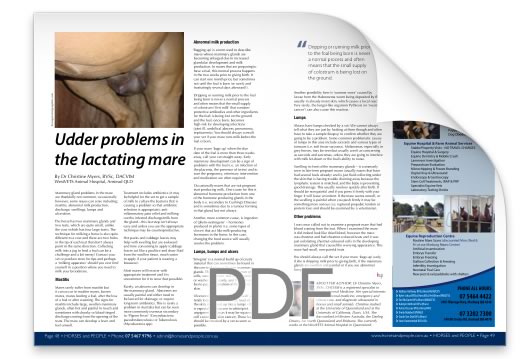