Moving horses interstate & internationally is a common occurrence in the equine industry. A disease associated with long distance movement is called Travel Sickness, also known as Shipping Fever or Pleuropneumonia. A respiratory disease of the lung tissue and pleural cavity (the space adjacent to the lungs in the chest), pleuropneumonia has been a well recognized condition since the early 20th century.

Pleuropneumonia became a major issue during overland and sea transportation of army remount horses during the Boer and First World Wars and caused three times as many fatalities as all other causes combined. The disease was initially thought to be a highly contagious condition exacerbated by crowded conditions and poor ventilation, however, quarantine, isolation and disinfection failed to reduce the number of losses. It has now been recognized that measures to reduce factors associated with the individual horse is the key to reducing the occurrence of pleuropneumonia.

How Does it Occur?

In the normal horse bacteria reside in the upper respiratory tract (nasal passages & throat) and important defence mechanisms function to prevent these bacteria from colonising the lower airways (lungs) which leads to the development of pneumonia. These defence mechanisms involve the continuous movement of mucus, containing bacteria and debris, away from the lungs, as well as specialised cells to engulf and remove any particles that do enter the lungs.

In the horse that is confined with its head continuously elevated above the normal standing position, an accumulation of secretions with large numbers of bacteria has been demonstrated. The cause of this is two-fold, with gravity facilitating the entry of bacteria from the upper respiratory tract into the lungs and also slowing the clearance of mucus, debris and inflammatory secretions that are produced. Stress has also been associated with a decrease in the number of specialised cells involved with clearance of contamination from the lungs. Once bacteria are allowed to colonise the lung tissue, pneumonia occurs, and as the infection worsens it spreads to the outer pleural cavity of the lung causing pleuropneumonia. The pleural cavity becomes distended with large volumes of infected fluid which causes difficulty with breathing.

Prolonged transportation of a horse by road, air or sea may see the horses head in a position that would facilitate the onset of pleuropneumonia, and provide sufficient stress to decrease natural defence mechanisms. Other factors that can contribute to the development of pleuropneumonia include strenuous exercise, inhalation of debris from an arena or track, deprivation of food or viral respiratory infections.

Pleuropneumonia can quickly become a serious and potentially debilitating or even fatal disease if not recognized and treated early. Horses with pleuropneumonia commonly present with fever, depression, lethargy and inappetance. Pleural pain may be evident as reluctance to move, cough or lie down. When the horse does move the stride is usually short, stiff and stilted and a soft grunt may be evident during movement. The respiratory rate is normally elevated however nasal discharge is not always present. The condition has been mistaken for colic.

Early recognition and prompt action are important for a positive outcome in this disease. A history of prolonged transport & stress, clinical signs and blood tests would be highly supportive of pleuropneumonia. Ultrasound of the chest is important for definitive diagnosis, collection of samples, assessing treatments and prognosis. Samples are also obtained from the lungs via an endoscope or through the skin at the mid-tracheal (windpipe) region of the neck.

The prognosis of horses with pleuropneumonia has greatly improved due to early recognition, advancements in diagnostic testing and aggressive therapy. There is no doubt that a delay in therapy results in a poorer response to treatment.

Limiting the Development of Pleuropneumonia

Research has demonstrated that short periods of head-lowering during confinement (30 minutes every 6 hours) were ineffective in preventing build-up of mucus and bacteria and that 8 to 12 hours was required for clearance of accumulated secretions following 24 hours of confinement. This demonstrates that the most significant potential for decreasing pleuropneumonia would be to allow the horses head as much freedom as possible. This permits the horse to lower its head during the transport period. Research has demonstrated that administering antibiotics prior to the commencement of long distance travel does not prevent pleuropneumonia. Further measures aimed at reducing the occurrence of pleuropneumonia include: 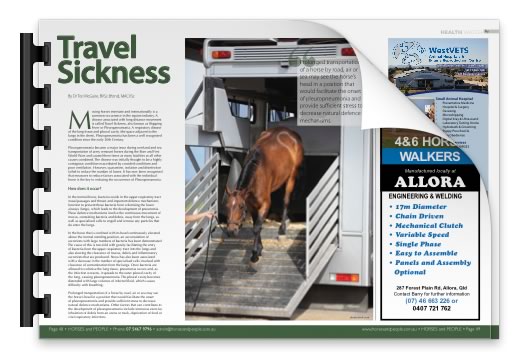